Any veteran label-reader — and I count myself one of those —  usually finds grocery shopping in another country more than a little challenging.

After a week of almost daily visits to the store, I now feel comfortable enough when checking out to politely say, “Ne,” when the cashier asks if I have a Tesco card. I can watch the amount flash on the register display and dig in my purse without too much trouble telling the coins apart. I can stuff my cheese and rolls and yogurt into my bag with the best of them.

It’s when I’m in the aisles that things get difficult. Take yogurt, for instance, plain non-fat yogurt, no gelatin, no vanilla. Certainly none of that syrupy cherry stuff. Stonyfield Plain Organic would be just perfect. But Tesco appears to have shelves and shelves of things packaged like yogurt, but much of it doesn’t SAY yogurt — or even jogurt. There’s Mi-gurt, Yogobella and Dobra Mama. Others look the same but I think are rice pudding — something to do with rice — rýžový something or other.

Yesterday, I bet on Selský Jogurt bílý. Google translate has no idea about the first word, so I decided it was the brand. Pictures on it were daisies and a metal milk jug. I figured out složení means what it’s made of — and then I was stumped. I did read “GMO-free” and “toku 3,5%” — that’s “fat” so I think I blew it as far as fat-free goes! But I don’t see anything like “želatina,” so I did avoid the gelatin. More important, it tasted great this morning with granola and strawberries. (I recognized what those were.)

And recently I found a great expat website, “10 tips for healthier grocery shopping in Prague.” That might be tonight’s bedtime reading.

But it’s not just food item packaging that gets me. 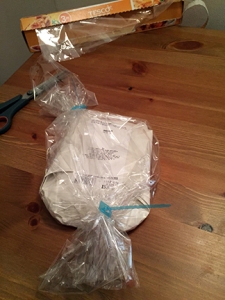 My attempt at getting a small roll of something akin to Saran Wrap to keep my cheese from drying out was tougher than it would seem. The picture on the box looks OK, but the bag appears to be open at both ends and 3 meters long. So, to wrap the cheese, I had to cut it and put “ties” on both ends. NOW I think it’s supposed to be something for cooking chicken or roast so it doesn’t splatter in the oven. But it works fine for cheese.

I passed up some capers today because, even though I was SURE that’s what they were, they seemed too large I hated to risk it.

Someday I’ll have an aHA moment when I’m reading a label, everything will make sense– and I’ll know it’s time to get my Tesco card.

(My apologies for using the same grocery aisle picture I used in a previous post, though horizontal and not vertical. You see, I realized today there’s a “take no photos” sign in Tesco, and I sure don’t want to lose my shopping privileges!)

4 thoughts on “And the label says…”