Lack of public transportation never seemed like a problem in Kent, Ohio — no buses run from our house to the Giant Eagle and even the campus is not on a bus run I could use to go to work. Still, that didn’t seem so bad. I have a car.

But when the students from Anglo-American University (where I am teaching this semester) came to visit us in winter 2014, I became acutely aware of our lack. Bus or train between Kent and Cleveland? Hmmmm. Not really. The latest bus Sunday runs at 7:30 p.m., and it’s not anywhere near the Greyhound Bus Depot for someone coming in from far away. Maybe just to Akron? Yes, some, but getting info about when they run and where is a challenge.

So, although I lived a while in Washington, D.C. and rode the Metro, even that wasn’t daily. Thus Prague’s public transportation loomed huge in my mind. How do I get a tram card? Does the same card work if I want to ride the metro? Do I need to present or swipe something, like I have in San Francisco? Scan on the way in and the way out, like D.C.? Or just get on and be ready to prove I have a pass if asked?

First google gave me the Dopravní podnik hl. m. Prahy (DPP) — the public transportation folks — and that mentioned places to get cards, the monthly rate and some off-hand remark about senior discounts. So I headed Friday to the metro station near Wenceslas Square. My half-Czech, half — OK, more than half-English conversation with the young man behind the window went well. Can I get a pass for a month? 670 CZK or about $28 — not bad. Are there senior rates? Yes. — those are free. Free??!! But you need a photo. My blank stare translated the same in Czech and English. “Over there,” he pointed, and I was on it.

The machine ate one 50 CZK piece, but even at that it was a bargain.

It was one of those typical photo booths, except directions were only in Czech. OK.  How hard can it be? First the seat didn’t swivel and my eyes were well below the line shown on the glass so…I braced myself and hovered over the bench at the appropriate height. (Does that explain the slight grimace on my face in that photo?)

For 100 CZK, I got five lovely pics with a forced smile — the card was then free.

But it worked, and after he took his lunch break, he came back and affixed it to the waiting car. Success.

The next step was to use it. By figuring out what the tram stop name is that’s a block from my apartment, I plotted the route to the Prague Ice Cream Festival. Trams ran every 15 minutes. I didn’t count on no air conditioning — though I should have — and no windows open and the outside temp 93.

But, hey, like the ice cream, I was a little melted by the time I made it there and back and now have only to figure out the subway. That’s another day. 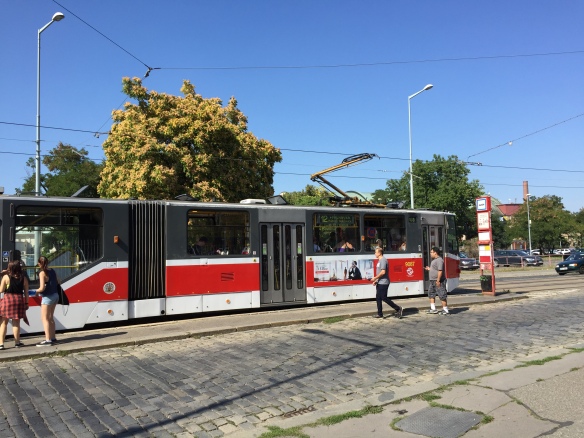 2 thoughts on “Conquering (some) public transportation”