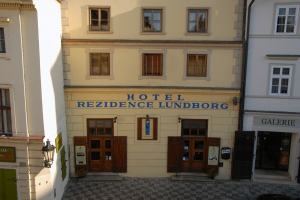 It’s Friday. Our flight to Brussels, then Washington-Dulles and finally Cleveland begins at 12:10 p.m. Sunday, or, actually, when the van picks us up outside Rezidence Lundborg at 9:15.

That’s the time right before you leave an extended stay when you don’t really want to go home — I still haven’t seen the Jewish Quarter, and I just found a little park right under the bridge away from the tourist throngs — but you also know you need to get everything together so the going is smooth. And you really DO want to see your family — and your pets.

Kirstie found some things to bring home, most of them red, except for the WC sign, a topic of a KentInPrague.com blog she wrote. (photo by Kirstie Ratzer-Farley)

Actually, the wind-down probably started earlier this week when Nicolle bought a scale. The number and variety of souvenirs the group will bring home is impressive. Mary’s large fluffy, pink llama is probably the most unique, though it does stuff down nicely into the one almost-empty suitcase she brought just for such a situation. Nicolle blogged about the souvenir topic last weekend, so it’s clear she will need to pack carefully.

I just had three takers for my two extra compression bags within the first minute of offering them on our Viber group chat.

Another telling sign of the wind-down was Kaitlynn, guiltily counting out coins to use for much of her dinner bill, just so that didn’t become a currency exchange dilemma.

I’ve spread out my clothes for tomorrow and planned to spots for what I’m wearing now.

We said good-bye to two valuable program connections: Alan Kraustengl, partner Anglo American University’s president, and Iva Skochova, assistant dean of the School of Journalism, but more important, our go-to person for journalism contacts and tips on everything from the Metro to the Czech personality.

Tomorrow we’ll fit in all we can: Some plan to head to Kutná Hora, where, according to estimates, bones of approximately 40,000 people were used to decorate the chapel. Others want to see the inside of St. Vitus Cathedral, which we’ve photographed at dawn, before it’s open, and at 10:30, after it closes, but our only daytime visit was with throngs of other tourists, and the line was too long.

The wind-down is full of one-last-times. We’ll end with a dinner on a boat in the Vlatava River and watch one last time the swans gliding by, and the sun setting behind the castle. We’ll walk home over the cobblestones and finish stuffing all we can into our suitcases — and all the memories we can into our minds. And I don’t think a single one of us will doubt that we’ll be back in Prague again someday.

We were a curious, excited, jet-lagged bunch, wound up to begin this adventure as we strode across Charles Bridge with our leader and protector, Bibiana Hakosova Aug. 4. (photo by Anna Hoffman)