Luggage checked. Passports in hand. Backpacks hoisted in place. After the security lines at Hopkins Airport 12 days ago, we had a half hour at the gate before boarding. Three went for pizza, two headed to the bathrooms and one more wandered off somewhere. How would we ever stay connected in a foreign country without our U.S. phones and texts?

But then I didn’t know about the joys of Viber. (Disclaimer: I swear I wasn’t paid by Viber Media or any of its subsidiaries for what I’m about to print.)

As its website says, “Everyone in the world can connect. Freely.” It allows for free text messages, photo messages and video messages with other Viber users on iPhone®, Android™, Windows Phone, Blackberry®, Windows®, Mac, Symbian, Nokia S40 and Bada devices over 3G/4G or WiFi connections.

Viber Media, which launched the app, was founded in 2010 and claims more than 200 million users in more than 193 countries.

To us, this meant almost constant, free contact, as long as our phones had wifi access, which we had in the hotel, the university classroom, most restaurants, the military university at Vyškov– almost anywhere.

For individual conversations,  Erica asked me if I could log onto the WordPress site and give her feedback on her blog, Anna told me when her interview was and Kaitlynn called for a little first aid. (My patient is doing well.)

With a group set-up, we announced a change in plans to head to the metro, shared a reminder about the need for passports at Radio Free Europe, and put out a call for a photo needed for a blog. I posted the weather forecast as everyone was ready to hurry out the door (wear layers), and Nicolle and Mary announced plans for a gelato run at 9. 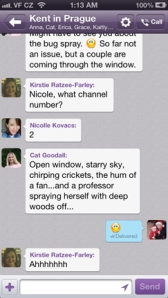 Perhaps the most intense need was the night at Vyškov. We trudged down the long hall, and each of us unlocked a plain white door. We each walked into a sauna, in reality a narrow dormitory room with serviceable bed, desk and chairs, but with no air conditioning to combat the 97-degree heat. Each had a fan and windows that opened, but, without screens, we soon were swatting a host of moths and other insects.

It was uncomfortable, a little scary (we weren’t sure what the next day had in store), and more than a little isolated. Then Viber came alive. From 9:30 until almost 11:30, the jokes flew, the ding of each new post like a welcome voice from somewhere not TOO far away until one by one, everyone fell asleep.

Other similar services exist, but, for now, Viber has been our answer to staying connected, whether it has been for to meet up for dinner, plan logistics or pass a somewhat lonely evening in the company of friends.