Having been to the Czech Republic before, I had no illusions about the cuisine. “It mostly consists of pork or beef meat with sauce and a side dish, the most common and liked being dumplings,” says Prague.net. Nothing is much further from my favorite foods than that! (I eat nothing with feet and believe gravy is an alien object.)

Svičková was an instant hit and a repeat meal for roommate Cat Goodall. Although I did take small taste of the gravy, that wasn’t my kind of food . (photo by Nicolle Kovacs)

But if I was going to nag my students to soak up the local culture and not head to McDonald’s (sadly, about a 5-minute walk, even more sadly, some did it daily), I needed to find a way to follow my own advice without drowning in a puddle of guláš (“goulash” — a Hungarian dish the Czechs have modified).

When one of the first menus had “Fried Ear of Central Bohemian Fattened Pig served on Lukewarm Potato-and-Leek Salad with Mayonnaise, Cured Cheese and Lightly Boiled Egg,” I thought I was in trouble.

Luckily, the lovely restaurant just steps from Anglo American University where we are working, had plenty more to offer me. Konírna served me salmon tartar with marinated fennel, crème frâiche and roasted baguette for my first lunch in Prague. Authentic? Yes, the menu says it “comes from the well-known fish ponds in the Třeboň region.”

In fact, salmon is a frequent easy lunch or dinner choice. Usually broiled, it’s served with everything from that same lukewarm potato-and-leek salad (not as bad as it sounds) to pretty standard fries to vegetable garnishes, depending on the restaurant.

Other restaurants and even carry-out stands allowed me to eat Czech and still stay away from meat and fried or breaded entres. Another standby has become caprese — as a traditional tomato and fresh mozzarella salad or, better yet, as a sandwich on a crusty whole grain baguette from the one-woman sandwich shop just around the corner.

Other good options have included thin-brothed though flavorful vegetable soup in a rye bread bowl and Greek salad (maybe not authentic-sounding but it appears on a wide range of menus). Grilled prawns and cuddlefish on a bed of lightly dressed field greens worked for me — though the octopus-looking tentacles on the fish weren’t popular with some of the party.

In short, from grilled vegetables and cous-cous to the ever-available salmon, four-cheese pizza that includes brie and gorgonzola, and the hotel’s endless breakfast buffet of fruit, salad, cheese, yogurt, rolls and more, Prague offers vegetarians plenty of authentic options.

And then there’s always gelato at 10 p.m., which works for vegetarians and meat-eaters alike. 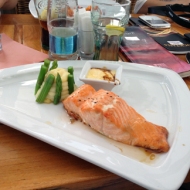 Salmon tartar with marinated fennel, crème frâiche and roasted baguette at Konírna included bacon-laced dressing on the side, which I didn’t touch it. 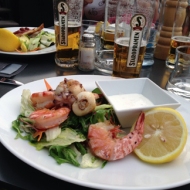 Grilled prawns and ciddlefish on lemon-dressed field greens and, yes, a local beer brand make a good dinner choice on a boat in the Vlatava River. 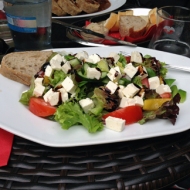 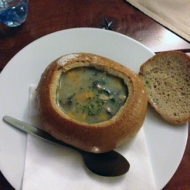 Tucked in behind the wall of a courtyard, we found an authentic spot on a cool and rainy night, just right for vegetable soup in a rye bread bowl.