That’s the mantra of the Kent In Prague group after Day 1 in the Czech Republic. Dealing with jet lag — no one got much sleep on the flight from Cleveland to Newark to Brussels to Prague — we greeter the Czech Republic with enthusiasm. Even three temporarily lost bags were not an issue — though I had worried earlier watching the Belgium Air baggage handler give my new suitcase a shove that sent it wheeling wildly under the plane to his waiting fellow worker on the other side. 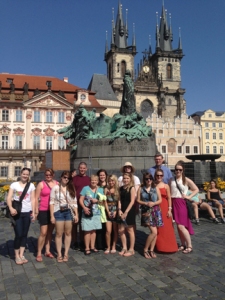 Slightly jet-lagged but awed by their surroundings, the Kent State group poses in Old Town, Prague, in front of the Jan Hus statue. (photo by Bibiana Hakosova)

The sun was shining — maybe a bit too much in the 80-plus-degree weather — as we set off with guide and protector Bibiana Hakosova, assistant to the president of Anglo-American University.

It was an amazing stroll across Charles Bridge, full of rambling tourists and street artists. Old Town on the other side was no less amazing. The cobblestone streets, roasting ham on a spit, crowds gathering in front of the Astronomical Clock as it strikes the hour — all unique to our Ohio eyes.

The group posed in front of Jan Hus, the statue to honor this martyr to religious reform in the 1300s who became a symbol of freedom during the era of Communism.

Dinner was a lovely meal on a terrace overlooking this scene, but then we saw the clouds rolling in. And then the waiter warned us of an impending storm.

I’ll confess to being a less-than-wonderful journalist, as I clutched my iPhone camera to me and I have no photos of the ensuing half hour. (Some of our students do, though.) The gentle rain turned fierce with what weather.com said were 35-mile-an-hour winds with 60+ mph gusts! The grit from those cobblestone streets bit into our legs as we hurried through the labyrinth of streets, aiming for Charles Bridge and the route to the hotel.

Huddled under an arch between buildings as one point, as Bibiana ran ahead to check out the shortest route, we watched in horror (yes, there were screams) as a window above her banged shut and literally exploded, showering her head and bare back with glass. Then, seconds later, one did the same just to the other side of our sheltering place.

We dashed to better shelter in a nearby restaurant, hoping for taxis that weren’t to be found and patching up Bibiana’s back with the Band Aids and gauze from our less-than-professional-quality first aid kits. Another dash and we were off again, finally reaching the hotel, thoroughly wet but certain this was one of the bad things that will make good memories — as long as Bibiana’s back is OK this morning.