Arriving in Czechoslovakia in July 1990, I had to conduct the bordering crossing in French. It’s the only language the guard and I had in common. (photo by John Perkins)

Anyone who knows me well realizes 2018 isn’t my first time in Prague. With the Velvet Revolution only six months past and the Soviet troops and their tanks finally gone, the Czechoslovak citizens elected their new president in June 1990. And we bicycled across the border from Austria one month later.

The Prague John Perkins and I found was not the one I know today. Kiosks near Wenceslas Square were covered with newspaper stories the country had never seen: the Bay of Pigs, the U.S. and Russian space race and so much more.

Currency could be converted to korunas but then not back to U.S. dollars so careful planning was important.

Friends since 1990, Ilja and I have some time to chat during my 2013 visit. Sára Berny — almost hidden in her bag — didn’t like me at first. (photo by Anna Hoffman)

The circular memorial to martyrs Jan Palach and Jan Zajic, university students who died from self-immolation back in 1969 in protest of Soviet occupation, was ringed with candles, the wax from their burning built up several inches all around.

To my knowledge, I have no Czech ancestors, but something connected. So I kept coming back. First for just a few days at a time In the mid-’90s before teaching workshops in Germany, able to visit a wonderful young woman — still my friend —  who helped me when my sleeping bag was stolen my first night across the border in 1990.

The student editor of the Prague group discusses what stories are due before deadline. (photo by Merle Dieleman)

Then in 1998, I came for more than a month to teach “fact-based American journalism” to Czech and Slovak teens with my colleague Merle Dieleman under the auspices of the Open Door Society. By then, the country had split in two with the Velvet Divorce in 1993, and we taught in Prague and then in Bratislava. Other changes were coming, too.

In 2013, Kent State colleague Cat Goodall and I brought 10 students from our College of Communication and Information to Prague for two weeks to explore “Modern Media and Democracy,” each student investigating a different issue the media in the two countries had covered — from education to public smoking to potential stereotyping of minorities (Concerns from Roma — gypsies— in the Czech Republic compare in many ways to that of blacks in the U.S.) The students’ KentinPrague blog and papers or multimedia presentations share much of what they learned of the culture and the city and also about themselves with the help of our partner school, Anglo-American University.

The Kent State group enjoys a visit to Radio Free Europe/Radio Liberty in 2013.

Then, in 2015, I spent almost a whole semester of my sabbatical teaching at Anglo-American– a wonderful experience with 18 students from 13 countries. Among other things, I learned that my choice of housing may have been convenient, BUT right in the middle of a tourist area, full of noisy Irish bachelor parties every weekend and smoke wafting into my bedroom window at 3 a.m.!

Yes, things have definitely changed since 1990. I’ve watched the city learn to welcome hordes of tourists — or, if not totally welcome, at least learn how to keep them happy. More than 1 million tourists used Airbnb in the country in 2017, according to Radio Prague. Beer is still quite cheap —mine, for instance, at the Strahov Pivovar yesterday was $1.80 —though water costs more than that. Festivals, supported partly by the city, spring up everywhere. McDonald’s, Kentucky Fried Chicken and Hooters — yes, two of those — are not hard to find. Churches, particularly in the Old Town area, have concerts nightly. My favorite is at St.Giles, first built in 1238 and then reconstructed in 1731. A very accomplished string quartet and organist present slightly more than an hour’s concert. The only amusing thing: Each of these churches that present such programs — including St. Giles — claims to have been the “famous interior from the film ‘Amadeus’ by Milos Forman.” How many churches could that film have used??!! (NOTE: I found an article about locations for the movie, and the only church they show is St. Giles!)

Prague has changed at lot in almost 30 years, but so have I. My Czech vocabulary has improved — I can read labels well enough to put back the deli potato salad with ham and exchange it for one with peas. (Actually, peas work better than I imagined.) And I didn’t once buy sour cream instead of yogurt this time. Although some menus are also in English, I know the words most of the main ingredients.

Perhaps even more important, I chose an apartment away from the tourists. Prague 2’s Vinohrady is a residential neighborhood art deco buildings in pastel with balconies, flower boxes and an occasional nude. The area is known for its expats and young professionals, plus its range of eateries — Japanese and French within two blocks of my apartment — and Riegrovy Sady (Sady means park.) with a beer garden and a long sloping hill that attracts college students and the elderly and everyone in between to sit on a blanket and wait for the sun to set behind the castle in the distance. That’s right across the street from me. This time the only thing that disturbed my sleep were the birds, chirping at 4:30 a.m., but I could just turn over and go back to sleep. Plenty left to learn, but I’m making progress. 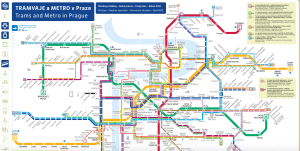 I’m also comfortable with the Metro and the trams, switching seamlessly from the A Line (green) to B line (red) on my way to the zoo and knowing to stand at the far end of the platform near the beginning of the train when it stops because cars there are never as crowded. I don’t hold my breath anymore as I step onto the escalator at my metro station, even though I’m SURE it’s faster than any of the others.

And, probably most important, I can now pronounce the station name and say it without hesitating: Jiřího z Poděbrad! The next goal: learn grammar so I can put sentences together and definitely learn numbers so I don’t have to look at the cash register to see what I have to pay for everything.

2 thoughts on “Still so much to learn…”