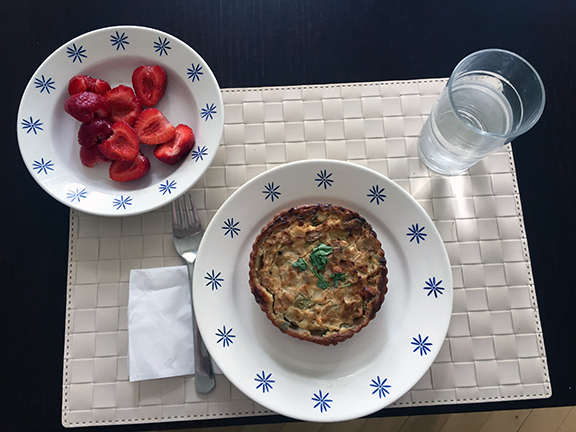 Actually, it began two days ago, first with a two-hour delay leaving Newark, a missed connection in Brussels and a reroute through Munich. But my suitcase didn’t take the same flights. More than 24 hours later, when the courier dropped it at my Airbnb, I could unpack, organize and start to really enjoy.

First stop this morning: The farmers’ market. It’s not the huge one by the Vlatava River, but that’s only Saturdays. Jiřák is three blocks away and open Wednesday through Saturday. And, yes, it has plenty of choices.

Markets like these require skills I needed to update — vocabulary and cultural both. I had to refresh my memory of food words, though of course some were easy. I recognized most of the vegetables: bright orange mrkev and young, green špenát and piles of brambory — all of which I bought.

I could smell the maso — the meat that was often garlicky sausage, smokey ham or various former creatures, hanging by their feet. No thanks. I passed on all of that.

Other stands had honey, bread, eggs, beer and wine. One cheese vendor offered tastes, so some of that, too, went in my bag.

Meanwhile, I fluctuated between using my probably mispronounced Czech words or just trying English or only using gestures. Generally, it was a mixture of all three, but I can always end a transaction with a fairly intelligible děkuji to be polite.

Then a pastry stand had savory tarts and quiches with the vegetariánský sign in front of them. Which to choose?! Into the bag went one with a golden top and obviously a bit of greens and something white. Just two more stops. The jahody were perfectly ripe and plump and needed to be on top. And the plants — probably for window boxes or gardens — were asking to come back to the apartment, too.

So now it’s lunchtime. The tart is fine, though I should have read the sign more carefully — or known the word for onion — because it’s a little strong, but still good, and I ate half of it. And the strawberries are as excellent as they look. The rest I’ll eat later and tomorrow, though, of course, the stands will be open then and I can go back and improve my vocabulary — and fill my refrigerator. 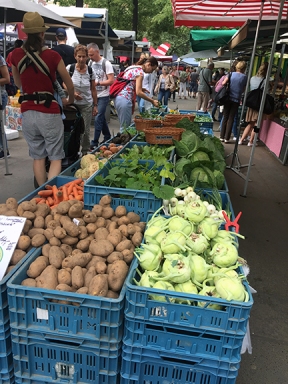 Farmers’ market Jiřák has plenty to offer, even in late May.

Strawberries tasted as good as they look.

The word I didn’t notice was cibule….