Yes, it’s a pretty short list, but here goes. After two months at home, I can truthfully say there are only four things in Prague I don’t miss: 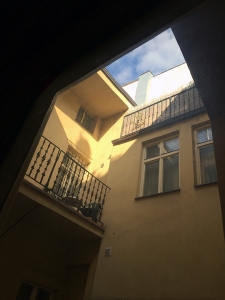 This is the tiny slice of sky I could see if I leaned way out of my kitchen window. My other window — in the bedroom — was blocked by the back of the Bellevue Hotel.

4. Inability to see the sky. True, not all who live in Prague have an apartment like mine, but many do. Streets are often narrow and any building that’s several stories high blocks the light and view of rooms across from it.

In my rooms, scoping out the weather was a bit of a challenge, but even worse was the mood this created. When I arrived in the city in late August, days were long, and the sun shone until well into the evening.

Not so by the time I departed. Days had fewer than 10 hours of light, and the sun dipped behind the buildings on my street before 4 p.m. That’s a lot of darkness for a lot of months — today, according to Date and Time Info, barely eight hours of light. I may not have more hours in Stow, Ohio, but I do have a longer vista so I can see the sun until it sets.

3. Noise under my window at 2 a.m. When I studied the reviews of the AirBnB I finally rented, some former residents noted a bit of noise — nothing bad, though. Sigh. With the bedroom on the front of the apartment and its window one story up, every sound on Karoliny Svetle sounded like it was right next to my bed.

In August and most of September, it was too warm to leave the double glazed windows closed. Below me to the left was the Guga wine bar, to the right the very noisy Duende Bar and Restaurant, whose patrons sat on benches in the open windows, exhaling smoke into the street and above.

Across the cobblestones was Cafe-Pub Atmosphere, which must not have allowed smoking as groups of up to 10 would come outside periodically and stand right around the corner from the front door, under my window, and puff away, laughing and joking loudly. In all, 10 restaurants lined my block, plus, at the corner was the top-rated Hemingway Bar. It was a happening area, unless you happened to want to sleep before 3 a.m. And that’s when the garbage collectors began.

It’s early yet. From my bedroom window soon the night life will be visible…and audible.

2. Hand-held showers. Anyone who was with me on the Kent State Modern Media and Democracy trip in Summer 2013 knows my challenges — some of theirs, too — with the curtainless showers. See “Day 6: Towel Usage Apology” for that story.

Thus my choice of an apartment for two months in Prague included a deal-breaker provision: It had to have either a shower curtain or a shower door. I settled for the curtain, but it did have a  hand-held shower spray. Fancy Jacuzzi though it was, this tub still required me to hold the spray.

That means only using one hand to open a shampoo bottle, one hand to reach for and use a razor, one hand to suds from head to toe, while still keeping the spray within the confines of the curtains and the tub.

1. Smokers. Admittedly the air is much better than when I first visited the city in 1990. Then, standing in any line — inside the train station, waiting for a restaurant table, even sitting in any restaurant — was an assault on my lungs and nasal passages.

But things are continuing to change. In June 2015, the Czech government approved a draft bill to ban smoking in restaurants and bars. Several of my students this fall at Anglo-American University wrote editorials in opposition — saying many eating places already banned smoking so let the non-smokers eat there. Finally the Czech Health Minister convinced the lower house to pass the bill in mid-December. The Prague Post quoted Svatopluk Němeček as saying, ““Let’s stop the practice of the elimination of one district town annually,” referring to the approximately 18,000 Czech citizens who die each year from the effects of smoking.

For the sake of the Czechs and their tourists, having both houses pass this bill would be a good thing. That might totally eliminate the thing I miss least in Prague.