The university building front hall is just not like most school buildings.

The first faculty meeting I attended during my stay at Anglo-American University was in a room with a crystal chandelier. I should have taken a picture of it, but then the meeting started.

Topics included accreditation, recruiting and pay for adjuncts. Heck, that’s the same stuff we discuss at Kent State. Then, after the meeting, the whole faculty had beer, wine and pizza, served in the courtyard downstairs. Nope, that’s not the same.

Looking back at my two months teaching here, though, I can say more was similar than different between the two universities. Sure, in my “Media and Shaping Public Opinion” class I had students from the Czech Republic, Belarus, Bosnia and Herzegovina, Russia, the Netherlands, Kazakhstan and Macedonia — plus five from Texas, New York and California. (Luckily, all are reasonably proficient in English, so that’s the language that’s used for everything.) When we discussed the refugee/migrant situation in Europe, the range of sincere, impassioned views was heartening. They knew about these things, and they cared, even though they didn’t always agree. 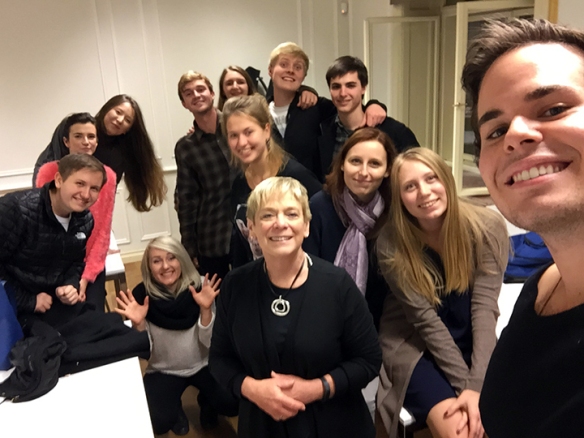 The last night of class with me was a good time for a selfie. Too bad six had already left early.

But they were still kids. I sometimes got a deer-in-the-headlights stare from someone when I mentioned an assignment due that night. I never did get everyone to use the file-naming protocol I kept demonstrating — Last Name_Assignment — so I could sort and organize what 20 of them turned in. (OK, 18 because two of them dropped for reasons not related to the instructor) And six left early the last night I was there, simply because it was the start of break, and one, for instance, had a flight in four hours to Moscow.

I taught in a building that had once been an abandoned neoclassical palace, but the university reached an agreement with Prague 1 Municipal Council and now has an exclusive lease for 15 years to the newly renovated building. It has 17 classrooms, each complete with projection equipment and other AV, a visual arts studio and a cafeteria that doesn’t look anything like the ones in Kent. And, though my room didn’t have one, it has plenty of chandeliers.

I met caring and innovative professors and bright, motivated kids. The head techie was willing to sit down with me to explain the NEO-LSM system. This is the kind of thing that’s tough to grasp in English, which he does speak, but his accent added another layer of confusion for me. Still, we got through it — and I can use their technology. I even could set up the projector for my laptop, though instructions were in Czech.

I also worked with sincere, hard-working administrators — Tony Oruza, dean of the School of Journalism, helped me set up a survey for his students that may lead to a paper about their reasons for taking that major and visions of their future jobs. He loaned me a tripod for night shots, got me a key to the lovely loft office and just generally made me feel part of the faculty.

Iva Skochova, lecturer who also deals with special journalism projects, was my “co-instructor,” though we planned for me to teach class until fall break and for her to do the part after fall break. It was the perfect solution so she, a free-lance journalist from the Czech Republic with a master’s from Columbia University, could use the time I was teaching to travel to Georgia and then Turkey, working on what sounds like an awesome video story.

University President Alan Krautstengl, who has an M.A. and Ph.D. in Applied Mathematics from Kent State University, knows the value of exchanges between his students and those in the U.S. and seemed genuinely pleased to have be teaching there, hoping to see more cooperation between the universities in the future.

Meanwhile, an old Czech proverb is “Kdo hledá, najde.” (He who looks, finds.) I spent two months looking pretty deeply at some aspects of Prague, especially this wonderful university. And I’ll spend many more months thinking about all I found.

The imposing front door of AAU looks out on a busy street with trams.

Another similarity — the young women at the reception were always willing to help with copying and such. 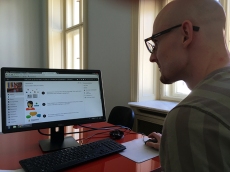 The view from my loft office space included Prague castle and more. 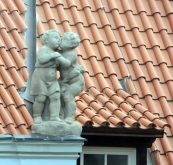 This little couple adorns the roof near my office window. 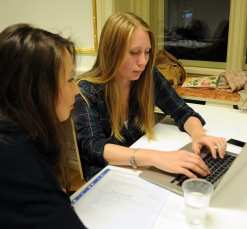 Assel Biyeva from Kazakhstan and Kristina Zakurdaeva from Czech Republic discuss a hypothetical editorial and what information they would need to write it well. Both are seniors in journalism at Anglo-American University in Prague. 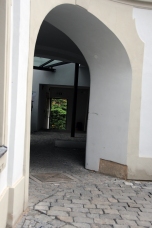 Another door to the university leads out the back way. 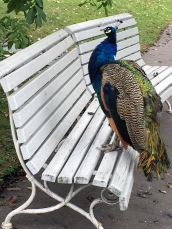 the back door of the university campus opens into a quiet, little-touristed park, complete with peacocks.