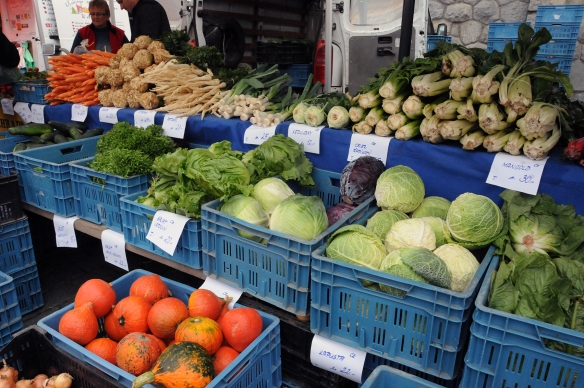 Actually, LOTS of little piggies go to market in Prague — and they show up as Pražská šunka (Prague ham) or as a wide variety of sausages browning on grills or ready to go home for dinner.

But plenty of other items are for sale in farmers’ markets here, though this is a fairly new concept to the city. According to writer David Creighton, they weren’t around before 2010.

“The first market was held on 20 March 2010 in Dejvice, Prague 6. Around 15,000 people visited the market, highlighting the great demand in the capital for a farmers´ market,” he reported a year later in “Farmers’ Markets in Prague: Expats.cz goes shopping for local food & drink.”

By 2015, at least six different markets have ready information on the Web. The closest and easiest to find for me was Náměstí Republiky, right by a main metro, in the shadow of the ornate and beautiful Obecní Dům (municipal building). It’s a large open area, not packed as tight with tourists as Old Town Square and easy to get to from there or from Wenceslas Square.

But as an authentic farmers’ market, it has some issues. Those should be places with stands run by folks with a little dirt under their fingernails and lots of healthy produce and fresh-looking baked goods. The yellow-jackets swarming on the koláče and limited number of food vendors didn’t feel right. The one ear of sweet corn I bought — admittedly without peeling back husks to check it out  — was tough and the kernels dented and a little dry when I took it home and cooked it.

The market hours — Monday – Friday, 8 a.m. – 6 p.m. — also seem curious. Shouldn’t the stall owners be hoeing and raking and baking until the weekend? 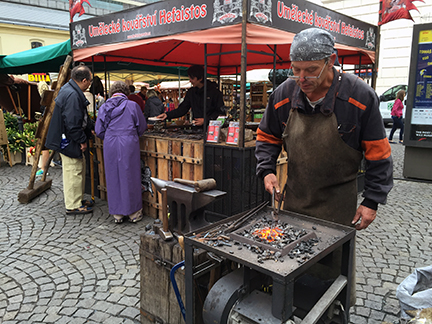 The blacksmith was intriguing, though a wrought-iron hook with no other ornamentation didn’t seem worth about $15, even if watching him form another piece was entertaining.

I took my corn, a mum plant and my koláče — without a yellow-jack —  and went home.

The nexy day — Saturday —  I hiked a little farther and found the real thing. About 75 stands lined the Vlatava River for the Náplavka market, offering everything from cheese and milk from David Kolman’s  goat farm in Krasolesí, to bread and koláče — without yellow jackets — from Jan Marsek family bakery near Liberec, about an hour northeast of Prague.

This is more like it. Music was at one end and a flea market at the other. In between were 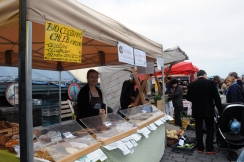 So I headed home with a bunch of carrots (far too many, but they only come in bunches), bread, koláče (I threw out yesterday’s yellow-jacket version, which I still hadn’t eaten, and felt much safer with this one), a huge bunch of basil (no, I’m not sure how to use it either, but it smelled sooo good), a small zucchini, several red potatoes, a little goat cheese and leek pie  and the soap. My biggest challenge, as with all shopping — had I chosen too much to carry on the walk home? Almost.

Now next week, Friday and Saturday, there’s a “celebration of honey” at the Jiřího z Poděbrad farmers’ market. That’s a 45-minute walk…or it could be my chance to try the subway. Let’s see — fifth stop from Staroměstská on the green line. Sure. I can do this.

2 thoughts on “This little piggy went to market”